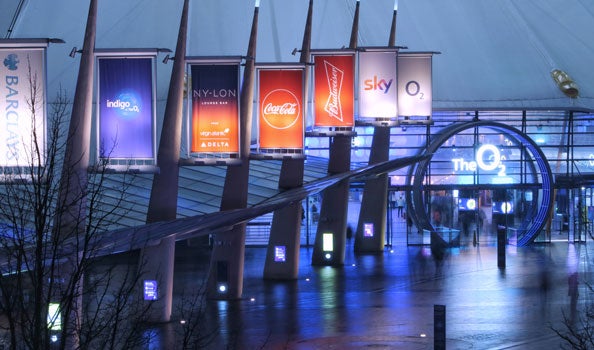 Birth of an icon

Almost 10 years ago, The O2 was transformed from a ‘white elephant’ into the world’s most successful music and entertainment venue when Bon Jovi burst onto the stage. Today, we’re thrilled to announce that we’ve struck a deal with O2 for them to remain the naming rights partner for another 10 years.

Since The O2’s birth in June 2007, we’ve seen some pretty extraordinary things, including an epic 21-night consecutive run from the legendary performer Prince and reunion performances from the Spice Girls, Take That and Monty Python.

We’ve welcomed 60 million visitors to the venue – not only to experience concerts, but also to see King Tutankhamun’s treasures, witness events in the 2012 London Olympics, catch a movie at the 11-screen multiplex, or simply grab a bite or a drink at one of over 26 bars and restaurants. Many daring visitors have even taken the action outside by walking over the top of the structure with Up at The O2.

Over the next 10 years, we’re going big with customer experiences, including even more early-access Priority Tickets for O2 customers and a 205,00 square-foot designer outlet (opening in 2018). We’re already installing ground-breaking tech which will give concert-goers an immersive experience that they can relive and even share with their friends on social media. Exciting times lay ahead.

I did not know that

As The O2 is 10 years old, and we’re celebrating another 10 years to come, here are 10 facts about it that you may not know:

The tent structure of The O2, which is the world’s largest fabric structure, is visible from space

It would take 3.8 million pints to fill The O2 with beer

36 million people have travelled to The O2 using the tube

Before Bon Jovi played the opening night, The O2 was put through its paces with a special event for O2 staff and their guests. Named ‘The O2 Premiere’, the gig featured performances from Peter Kay, Kaiser Chiefs, Tom Jones and Basement Jaxx

In 2013, The O2 hosted Campus Party Europe – the world’s largest technology event – which welcomed around 10,000 guests and featured appearances from some of the world’s leading technological minds, such as Vint Cerf, (one of the Internet’s founding fathers) and Noland Bushnell, who created Atari. Robosapien even showed up. 1600 tents were erected and The O2 was home – for a week – to 3000 attendees who stayed and geeked out 24/7

If you laid the Eiffel Tower on its side, it would fit inside The O2

In the summer of 2012, The O2 was briefly renamed ‘The North Greenwich Arena’ during the London Olympics

A special award – the 21 Club key – is presented to artists who have performed 21 nights at The O2. The 21 Club’s inaugural member was Prince, who has since been joined by One Direction, Michael McIntyre and Take That among others.

When artists perform, they often have a ‘rider’ – a list of things they require for their dressing room during their time at a venue. With the ever-increasing list of megastars who have appeared on The O2’s stage, you might think there have been a few pretty wild riders. You’d be right – here are 10 of our favourites:

Everything white in the dressing room – including the walls

A box of tissues (must be cube shaped)

All food to be covered in cling film

A full-size snooker table with cues, chalk and racks, but no balls

A physician to administer a B-12 injection

McDonalds hamburgers – without the buns.

What’s your favourite memory of The O2? Let us know in the comments below.