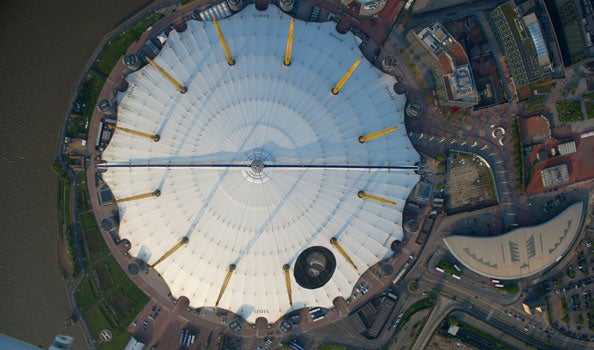 London is a pretty awesome city (not that we’re biased) and it looks even more amazing from above. Unless you’ve chartered a private helicopter or have your own jet, there’s a pretty good chance this isn’t a view you’re going to see all that often.

We’ve put together some of our favourite bird’s-eye pics of London. And don’t forget, you can also sign up to scale our famous tent and take a few of your own, thanks to Up at The O2.

2. Stunning night view over the Southbank courtesy of @jasonhawkesphot.

4. We reckon the guys at @NPASLondon have a pretty cool job policing our capital from the sky – imagine views like this every day!

5. And before they were known as @NPASLondon, they were called @MPSinthesky. We couldn’t NOT share this amazing image…

Wonder who snaps the aerial images of London on the @MPSinthesky account? Find out here http://t.co/7TMEzxvWLn pic.twitter.com/4ltRVgFO3N

6. Oooh look, it’s us! Thanks @mooncatwrangler.

7. More from @mooncatwrangler who is a professional abseiler. Don’t look down!

London, from above. This was taken from the top of the BT Tower. The photo is looking nort… https://t.co/0R3P9xHtmQ pic.twitter.com/cgSm2WtLXe

9. That accolade now well and truly belongs to The Shard, which just happens to be the centrepiece of this amazing shot by @zarashabrina!

10.We always knew Hyde Park was pretty massive, but this snap from @kathyroseobrien confirms it!

11. Is it just us, or does this look like London in miniature? Great shot @matthewbowden.

12. If there’s one benefit from waking up early, this must be it @fatalswitzerland. 13. London squirrel from above. Oops, how did that get in here?

Squirrel from above #London