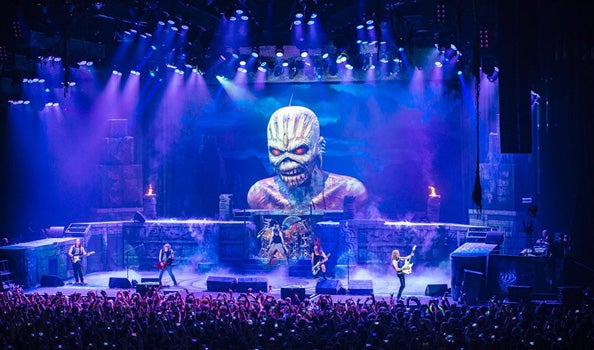 Support acts often have a tough job. On a good day, they whip up the crowd into a suitable frenzy only to make way for the headliner. On a bad day, they can play to a lot of empty seats and grumpy fans who are waiting for the main act.

But warm-up bands sometimes go on to achieve even bigger and better things than the acts they once supported. Let's take a sneak peek at how some of the biggest superstars started out...

Iron Maiden and KISS are arguably two of the biggest names in rock history, and lucky fans got to see them jam together on a European tour in 1980.

At the time, Iron Maiden were hardly a household name. They'd only just released their eponymous debut album, but would later become one of the biggest metal sensations of the '80s and beyond.

While the bands haven't toured together since, Iron Maiden and Kiss will both be wowing crowds (separately) at The O2 in May 2017 for those who want to relive the magic, like @LadyyyAmy.

So freaking buzzing for @IronMaiden at the O2 next year 😍🤘🏼 https://t.co/GPZE4rCpJO

The Beatles warmed up for Roy Orbison

You have to go a long way back to find a time when The Beatles weren't a headline act. But in the summer of 1963, the mop-topped Merseysiders were just the openers for American crooner Roy Orbison.

By the end of the UK tour, The Beatles were co-headlining with Orbison, who graciously decided to share top billing rather than 'Crying' over what was no doubt 'A Hard Day's Night' for him!

The Beatles went on to become the world's biggest-selling band, but they remained close friends with Orbison.

Rihanna/Lady Gaga and The Pussycat Dolls

If you want to become a pop megastar, opening for The Pussycat Dolls seems to be the secret ingredient!

Rihanna supported the Dolls on the European leg of their 2006-7 PCD World Tour, just months before she released her third studio album Good Girl Gone Bad, which marked a new, edgier and more successful style for the R&B singer.

In 2009, Lady Gaga followed in Rihanna's footsteps by opening for PCD in Europe. The Doll Domination Tour was the final string of concerts for the Dolls, but Lady Gaga went on to win six Grammys and become one of the best-selling artists of all time.

Nathan Sykes may not yet have hit the dizzying heights of stardom as some of the other performers on our list - but we predict big things for the Gloucestershire sensation!

The 23-year-old's band The Wanted split in 2014, but that didn't stop him from testing the waters as a solo artist, and who better to help you make a name for yourself than Little Mix?

The X Factor successes embarked on their Get Weird Tour earlier this year, and it was one of the highest grossing tours ever by a girl group. Lucky Nathan!