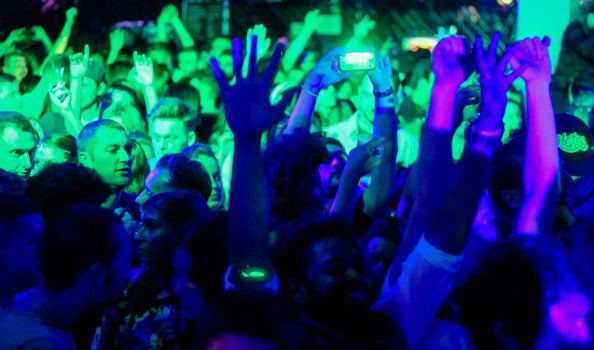 How To Make A Night Out EVEN Funnier

We’ve witnessed countless hilarious nights out here at The O2 – to the point where, for some, we could be considered experts in the field. We’ve seen it all: elaborate birthdays, enormous pop concerts, THE DARTS (which is always a serious night out), and big groups of mates carelessly dancing the night away in one of our many bars.

Of course, we all have our own idea of what makes a good night out.

Some, though, like their evenings sophisticated. Others prefer things slightly more debauched. But if it’s side-splitting laughter you want from a night out, just follow the five steps in our guide, and brace yourself for a weekend to remember. And if you’re daring enough, combine all five suggestions below for THE most raucous night of your life.

Carry around a party prop all night

And by party prop, we literally mean any random item you can find; from an old, stale baguette to a framed picture of Spandau Ballet. Party props make for a seamless and stimulating conversation starter, and always add an onslaught of spontaneity to a night out. You never know what sort of inane shenanigans you’ll end up embroiled in while wondering around town at 1am, offering bites of raw butternut squash to strangers. You’re guaranteed to make a few new friends, at least, and have some very funny memories the next day!

Go out as an alter ego – and make it totally ridiculous

Often on a night out, you’ll meet a bunch of people who you’ll never see again. So really, what harm is there in making up a bizarre alter ego for your own amusement? You could be anyone; a Brazilian fisherman who just landed in the UK for a global fishing conference.  Or a humble potato farmer who’s experiencing city life for the first time. And for the record, a fake accent always adds massively to the amusement. If you’re single, though, just hope you don’t accidently meet your soulmate that evening. It’s always an awkward conversation the next time you meet.

Relentlessly dare your mates to do embarrassing things

Once it begins, it generally descends into extremely humourous chaos very quickly – and the later the evening gets, the sillier it all becomes. Keep it light-hearted, of course. The last thing you want to do is inadvertently ruin someone else’s night, or cause anyone inconvenience. But back-and-forth dares with your mates can turn a quiet Tuesday evening into a night you’ll never forget.

It’s a simple one, but always very effective when it comes to increasing humour levels on a night out. After all, how can anything NOT be funny when you’re standing around in a bright orange afro, playfully telling everyone else how ridiculous they look. Oh, and the subsequent Facebook pictures from the night will add a second (and often equally funny) dose of hilarity to the evening.

Basically, if you’ve never played Barman’s Knock, we highly recommend you give it a go. This is what you do: go to a bar, order a drink, and ask the bartender what their favourite bar and their favourite drink is. You then go to that bar, and drink that drink, asking your new bartender the same question. And so on. You get the idea. By leaving your night totally in the hands of bartenders, you have no idea where the evening will take you, or what situation you’ll end up in. And let’s be honest, if you’re going to ask for bar recommendations, you might as well ask a professional.