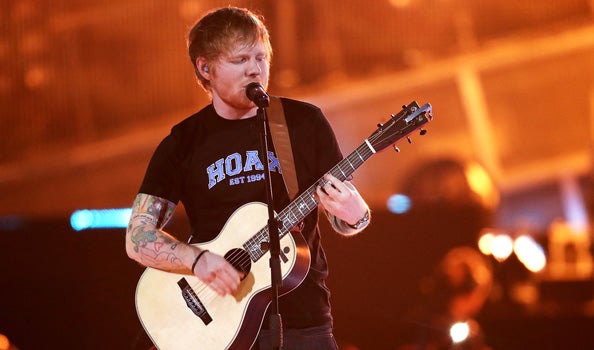 We all love the greats, the musical heroes and heroines who we can’t imagine our lives without, but right now music has never been so electric and full of talent coming at your ears from every genre. And breath…. But who out and out deserves to be called a L E G E N D right here? Right now? We think these artists are heading for the hall of fame as we speak.

Flying the flag for strawberry blondes everywhere, Ed’s beautiful songwriting, down to earth vibe and dulcet tones have seen him succeed where other singer-songwriters have failed. People love Ed like they love Christmas and we know why having seen him in the tent many times and with more to come.

Bad Girl Riri is everything a modern heroine should be -  sassy, fearless and always doing things her way. Refusing to ‘pop-up’ her image, she does exactly as she wants with her music and her style while being loyal to her Barbados roots.

Legend Status – The only girl in the world.

The modern Chuck Berry meets James Brown, Bruno puts the ‘L’ in legend with no one else around quite bringing the flavour he brings to the stage. Bruno doesn’t walk – he glides on vibes and even when Motown Records dropped him early on in his career, he sashayed on over to Atlantic Records and never looked back.

No doubt about this one, Taylor’s pretty much got it all – the voice, the songs, the awards, the fans, the look, the legs! No wonder she doesn’t get hung up on anyone, she’s far too busy being selling a million albums in a week (yep, for three albums nonetheless). 100 percent ledge.

Legend Status – Never ever, getting back down from the throne.