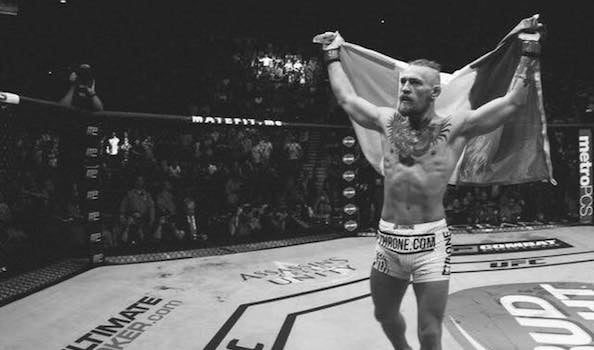 If Muhammad Ali is the undisputed king of trash talk, Conor McGregor is surely the number one contender. Over the past three years, the UFC’s featherweight champ has wowed fans and media alike with his spectacular skills inside the cage – and his outrageous comments outside of it. As ‏@_cameronfinn so aptly puts it, ‘Conor McGregor is an absolute legend in the making, everything he does is complete box office.’

Conor McGregor is an absolute legend in the making, everything he does is complete box office

With the UFC set to return to The O2 in February, here’s our pick of McGregor’s most memorable lines to get you in the mood for MMA.

‘I will go over to Brazil and take out every man, woman and child to get [Jose Aldo’s] belt’

‘My thoughts on Dennis Siver are he’s a midget, German, steroid head.’

‘He [Dustin Poirier]’s a quiet little hillbilly from the back arse of nowhere. His cousin is probably named Cletus.’

‘I see fighters make funny videos about me and stick them on Facebook and get 20 likes. When I make a video, I sell it to Fox and make seven figures. That's the difference.’

‘There’s only two things I really like to do: whoop ass and look good. I’m doing one now and Saturday night I’ll do the other.’

‘Doubt is only removed by action. If you’re not working then that’s where doubt comes in.’

‘I am cocky in prediction, I am confident in preparation, but I am always humble in victory or defeat.’

On the rise of Irish fighters in the UFC: