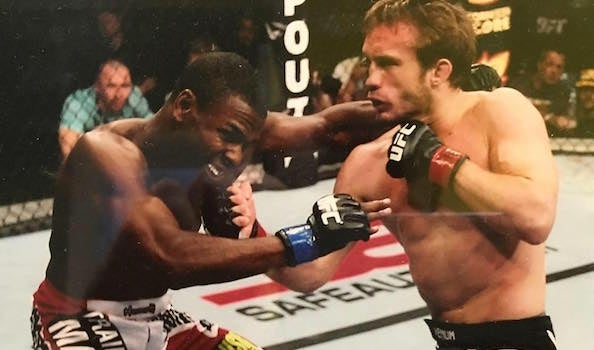 The Top 5 British UFC Fighters Of All Time

Following a series of record-breaking events in 2015, the UFC is set for a triumphant return to The O2 in February, much to the excitement of MMA fans across the UK, including ‏@secondsout_, who couldn’t help tweeting @UFCEurope when they posted a recent stadium picture: ‘That's insaaaane and just shows how much the UFC and MMA is growing globally.’ If you haven’t guessed already, the stadium is MASSIVE!

That's insaaaane and just shows how much the UFC and MMA is growing globally https://t.co/n1meHKrLzL

While the full fight card is still to be announced, you can guarantee it’ll be stacked with the very best domestic talent – giving us the perfect opportunity to pay tribute to the greatest British fighters of all time.

A true mixed martial arts pioneer, the burly Sunderland-born heavyweight was the first Brit to fight in the UFC way back in 2000, when there was no money or fame to be had and fighters competed for the sheer love of it. He was also the first man to beat future heavyweight champ, Frank Mir – in a career-defining performance that still ranks as one of the sport’s biggest upsets – finishing him in the first round at UFC 38 in (of all places) the Royal Albert Hall.

Since beating fellow Brit Andre Winner to win the ninth series of The Ultimate Fighter reality show, the second Sunderland-born slugger on our list has established himself as one of the most consistently classy and entertaining strikers in the UFC’s lightweight – and occasionally featherweight – divisions. And although Pearson’s career has had its ups and downs, his six-year tenure and record of ten wins, six losses and one no contest is especially impressive given that he competes in the promotion’s toughest weight class.

If there’s been one major knock on British fighters over the years, it’s a lack of wrestling skills, which is understandable given that both Olympic disciplines (freestyle and Greco-Roman) are virtually nonexistent on our shores. But proudly bucking that trend is London’s own Pickett, who has repeatedly bested experienced American wrestlers at their own game, including current flyweight champion Demetrious Johnson, while winning over fans on both sides of the Atlantic with an all-action style that’s seen him earn four UFC ‘fight of the night’ awards. And regardless of all of the above, any man who walks out to Chas and Dave’s Wallop, reading a newspaper dressed as Brad Pitt from Snatch (or Pickett’s suspiciously similar-looking Granddad, according to the man himself) gets a big thumbs up in our book.

Hailing from Nottingham – hence the nickname – where he was a longtime teammate of Pearson, the man with the Mohawk’s 4-0 run in the UFC welterweight division in 2008-2009 saw him become the first (and to this date, only) British fighter to earn a UFC title shot. And although he got outclassed on the night by Georges St-Pierre – who’s arguably the greatest fighter of all time – he earned universal plaudits for his gutsy performance, going the distance with the champ despite nearly being finished on multiple occasions. Unfortunately for Hardy, his career was tragically cut short in its prime when he was diagnosed with the heart condition Wolff-Parkinson-White syndrome in 2013, since when he’s been offering fans unique and articulate insights into the fight game via his new role as a UFC commentator.

If Freeman opened the door for British fighters, Bisping blew it clean off the hinges. The Lancashire fighter made his name by winning the third season of The Ultimate Fighter in 2006. Since then he’s competed in a British record 24 UFC contests, winning 17 and losing seven while establishing himself as a perennial top ten contender in the middleweight division and coming agonisingly close to equaling Hardy’s title shot achievement on numerous occasions. He’s also been a polarising figure, winding up opponents – and large sections of the American audience – with his forthright, occasionally cocky but always tongue-in-cheek pre-fight banter, which only makes us love him even more. Now in the twilight of his career, ‘The Count’ has cemented his place in UFC history and established a legacy that upcoming British fighters will have a hell of a time trying to emulate.