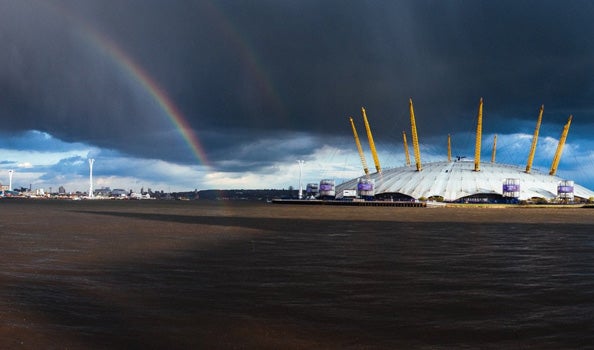 Your AMAZING Rainbow Pics Of The O2 [2 mins]

Everyone loves a good rainbow, especially when it’s shining down over our place. Some of you lucky London visitors have seen spectacular rainbows over our neck of the woods, here are some of the best...

Lucky @giorginamariaz gets to look at us from her desk every day! She snapped this corker and some moody skies to boot.

Isn't @AdamPaciorek a charmer? Though we’d say he’s right judging by this snap!

If you ever wondered where is the beginning of the #rainbow ..... its @o2arena . pic.twitter.com/hIe0sX9z7r

It looks like @fertraxx had the perfect vantage point from the 31st floor to capture this photo of us.

We reckon we look pretty good in this snap. @shall2410 proves that we don’t have a bad side.

Have you ever seen both ends of a rainbow? @itsamistry_uk has! We’re loving his panoramic photo.

We can see a recurring theme with these photos! We’re at the end of the rainbow again in @mrjaydeeem’s shot, maybe we’re part leprechaun?

It's not every day a rainbow ends at the O2 Arena is it? pic.twitter.com/Bv1qKjqiSC

This panoramic snap of us and a DOUBLE rainbow by @aperfect is – as his name suggests – perfect!

Story and behind-the-scenes info on the edit at https://t.co/Zdyn8cDcrW pic.twitter.com/cUsbzXy8vp

The skies may look moody in @TimSlo’s snap, but we’re certainly not! We love this angle...

It’s another double rainbow snap by @adverplanner. We prefer close-up shots of ourselves, but we reckon we look pretty good in the distance here, too.

Rainbow over the O2 Arena #nofilter

Check out @jrnicole_x at our summit - she’s managed to get this cracker with a rainbow in the background!