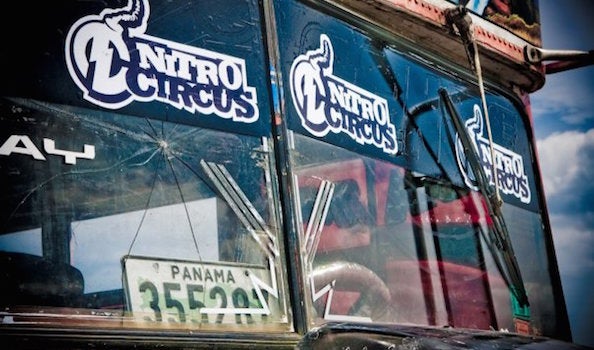 It’s the most spectacular live action sports show in the world, packed with death-defying, terrifying and outrageously funny stunts, performed by some of the most fearless athletes of all time – and it’s heading to The O2 in February. Here’s our guide to the stars of the Nitro Circus, and some of their most extravagant tricks.

Quite simply, Travis Pastrana is freestyle motocross. The Nitro Circus founder won his first world championship at 14 years of age, then proceeded to claim a record five X Games gold medals before cementing his place as an action sports icon by landing the first ever motorbike double backflip in 2006. What’s more, he’s got a reputation for being one of the nicest, most down-to-earth blokes you could ever meet. Legend.

Hailing from the skate parks and footpaths of Australia’s Sunshine Coast, Ryan Williams has established himself as one of the greatest scooter riders ever, with close to 10 million views on YouTube and a string of world-firsts to his name, including the inaugural double frontflip and the first ever Silly Willy – a full twisting 360 double frontflip. And if that wasn’t enough, he’s also the first person to land a triple frontflip… on a BMX!

Van Vugt is one of the most accomplished female athletes in action sports today, with her willingness to take on any challenge earning her the nickname ‘the craziest woman on the planet’. Having ridden bikes since age 11, her career-defining moment came in 2006, when she became the first woman to backflip a full-sized dirt bike over a 60-foot ramp. One of the toughest members of the Nitro crew, not only does she throw down any trick the boys are attempting, she often does them bigger and better.

Proving that any obstacle can be overcome with a little innovation, ‘Wheelz’ – who’s been confined to a wheelchair with spina bifida since age seven – is a pioneer of WCMX, adapting tricks from skateboarding and BMX to become the world’s first extreme wheelchair athlete. His craziest achievement? Pulling off the first ever wheelchair frontflip in front of 17,500 screaming fans during the Nitro Circus tour of New Zealand in 2011. What a guy.

The man nicknamed ‘Warrior’ shot to fame in 2011 when he became the first person to land a triple backflip on a BMX after convincing his local McDonald’s to stump up the cash for his Guinness World Records application. The video of his success immediately went viral and the rest is history. Incredibly, he went one better in 2015, landing a frankly unbelievable quadruple backflip. ‏@sproogen was certainly impressed enough to tweet ‘@JamesAlanHill oh yea, I have already seen it, but it is crazy. Have a look at nitro circus landing the first quadruple backflip on a bmx!’

@JamesAlanHill oh yea, I have already seen it, but it is crazy. Have a look at nitro circus landing the first quadruple backflip on a bmx!

A truly inspirational dude, Sinclair suffered a horrific crash while attempting a double backflip in 2009, lacerating his liver, breaking multiple bones and sustaining extensive head injuries. With his career almost certainly over, he had to struggle through six months of grueling rehab just to learn to walk, talk and operate as a human being again. So what did he do when he finally got the all clear? He got back on his bike, and – exactly one year to the day after the crash – won the Best Trick gold medal at the X Games with, you guessed it, a perfect double backflip. What a hero.

Conventional wisdom said that a triple backflip on a motorbike was impossible, that it couldn’t be done, and that you’d die trying. Josh Sheehan said otherwise, and on 28 April, 2015, after a year of meticulous preparation, he landed the historic stunt at Pastranaland, the spiritual home of the Nitro Circus. Mr. Sheehan, we salute you!