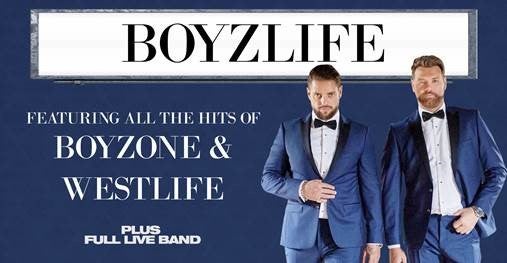 This event has been rescheduled to 8th October 2021. Tickets remain valid. Please contact your point of purchase for any further enquiries.

Two of the world’s biggest bands BOYZONE and WESTLIFE come together,

for the very first-time featuring BRIAN MCFADDEN and KEITH DUFFY

This specially adapted theatre production will include many of their greatest hits, the catalogue includes a record breaking 18 Number 1 singles and 9 number 1 albums, and combined record sales of over 60 Million Units.

In  Feb-March  2020 Boyzlife took to the road to embark on what was to be the  most  successful theatre tour of   2020  in which they performed nationwide sell out shows selling over 35,000 tickets .

BRIAN MCFADDEN featured on all WESTLIFE’S number 1 Singles and Albums and has since had a Solo Number 1 Album.

KEITH DUFFY has recently finished touring with BOYZONE on their Final ever Sell out Arena tour.

To help everyone attending an event at indigo The O2 to stay safe we’ve made some changes to how we operate. Find out more about our enhanced health and safety measures.