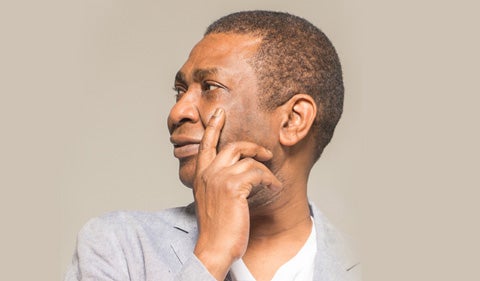 The King of African Music; the Senegalese Superstar Youssou Ndour will deliver a unique one-off show in London this August, alongside his band Super Etoile de Dakar.

The Grande Bal will largely be an undiluted Mbalax soiree drawing on some of the best dance songs from his spectacular repertoire, built over 40 years of live performances and studio recordings.

Youssou Ndour is not only an accomplished cultural icon but plays a pivotal role in global geopolitics. He mounted a very vocal campaign for the release of Nelson Mandela at the height of the antiapartheid struggle. In his musical performances at global concerts for Amnesty International, and his role as UNICEF Goodwill Ambassador, the musical icon continues to champion progressive global causes in Africa and the world, highlighting the plight of Africa’s marginalised peoples.

Youssou will perform at Indigo for one night only, in what will be a truly magical night of African music and dance; in a uniquely Dakar-Banjul like setting.

Tickets are on sale Wednesday 13 June at 11am.