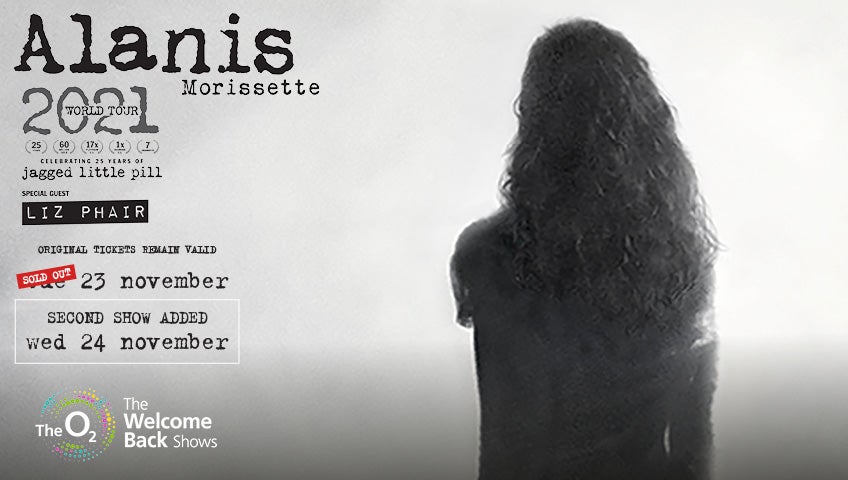 Alanis Morissette confirmed for The O2’s Welcome Back Shows

Today, seven-time GRAMMY® Award-winner and multi-platinum singer-songwriter Alanis Morissette has announced a new headline show at The O2 on Wednesday 24 November 2021. The event, which is the fourth show to be announced as part of The O2’s Welcome Back Shows, is a celebration of 25 years of Jagged Little Pill and her upcoming album Such Pretty Forks In The Road.

Tickets go on general sale Friday 4 June at 10am and are available at theo2.co.uk

Alanis Morissette joins the exciting line-up already announced for The Welcome Back Shows at The O2, which is set to showcase the very best of British and International acts, so far including Burna Boy on 27 August, Ministry of Sound Classical on 13 November and UK comedian Mo Gilligan + Friends with ‘The Black British Takeover’ on 8 December.

More full capacity shows are to be announced in the coming weeks.

Christian D’Acuña, Programming Director at The O2 said: “We’re delighted Alanis Morissette will be joining the bill on our Welcome Back Show series. Alanis will be celebrating the 25th anniversary of her seminal album Jagged Little Pill which sold over 33 million copies worldwide, and we can’t wait to celebrate and sing along with her in an arena full of fans later this year.”

Working in partnership with O2 to launch and deliver The Welcome Back Shows, fans using the Priority app will have exclusive access to buy tickets for each show 48 hours before anyone else, allowing them to secure their place at one of the hottest gigs in London. Presale tickets are available from 10am on Wednesday 2 June.

The O2 is just 15-minutes from central London and easily accessible by tube, road or Uber Boat by Thames Clippers and has plenty of car parking space available.